I have a lot to thank the 12 Bar Club for and particularly the clubs promoter Andy Lowe whose commitment to great music and talent underpinned the club and it’s community for the best part of 20 years. However it was Phil Ryan who booked me to play for the 1st time on the opening night of the newly reinvented club, formerly folk venue The Forge. The history of the club on Denmark Street ‘Tin Pan Alley’ bang in the heart of the west end of London is the stuff of legend. It’s a story I feel privileged to have been a part of with my Cushy Productions night.

It was also Phil who offered me the chance to run my own night at the club once a month as a residency for me and my band, allowing us to experiment with new material and showcase other bands we liked for more than 8 years. There was a succession of promoters after Phil moved on who stuck by us; Madge, Richard, Allan, and of course Andy. 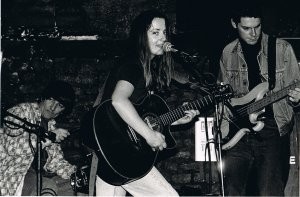 I should also thank the various owners of the club, who on more than 1 occasion had their backs to the wall to keep the place afloat. In particular, Andy Preston and Lars Erickson who set up the club with a very well stocked vodka bar as I recall which went down very nicely with the many musicians and West End revellers who hung out there till dawn. Unfortunately the business model,  resulted in them giving away more of the vodka than they sold and was fundamentally flawed. That and the battles with Camden Council over the licence meant the club had to run as a private members club. It was a farce really. Just in case the club was spot checked, everyone entering had to ‘join’ the club, fill out an application and be given a membership card. It was a royal pain in the ass. but eventually during Carlo’s tenure, the licence was sorted and the club, as a bone fide music venue, really started to take off.

Rhatigan the band grew up and evolved on those Thursday nights. The residency gave us the chance to try new songs and ideas and since it felt like a home from home, we had a very relaxed approach to our sets. Sometimes a bit too relaxed! We probably played some of our best gigs on that tiny stage but unfortunately probably also played some of our worst!

My over riding memories of the Cushy nights were the people who came and supported us. Karen, Scott, Mark… ok I’m not going to mention every single person but there was a hard core group that kept us going, no doubt about it. And of course the many wonderful bands and solo artists who kept the Cushy nights vibrant and exciting. If you hit the link to the Cushy Productions website you can browse through the monthly blog I uploaded and emailed out at the time to promote the night. It covers the period from Christmas 2002 back to Christmas 2000 though I’m sure the blog and email outs go back a good few years prior to 2000 but they appear to have disappeared from the site. Hardly surprising since it hasn’t been maintained in 12 years and was a very DIY website to begin with,  Before I, belatedly, embraced technology the promotion for the night was all done by hand. Hours splicing and pasting flyers and posters and fortunes spent on stamps. Jesus when I think of it! Actually thinking about it makes me very happy. Those were definitely some of the best years of my life.

So now it’s gone. Along with so many Tin Pan Alley institutions. Music shops, publishers bars and clubs all gone in the name of ‘progress’. Why is heritage, particularly the legacy of the great live music venues and the music they promote and nourish so underappreciated so cheaply thrown away. Maybe it’s always been that way or maybe it’s just another symptom of the disease attacking the fundamental status of music and musicians. Are we a dying breed destined to become extinct, to be replaced by what?

No I don’t believe it. It will not happen. As long as a single human voice can express itself through music live in a room for other humans to listen to then live music will play on. Keep going to live gigs there are so many great bands and artists to see and hear. It’s time for the next generation of promoters and musicians to carry the baton, to stand up for the venues. To find new venues. It’s time to tap into that far too long undervalued resource of real music played by real people. I for one fully intend to play on regardless….

I can’t believe I’m uploading this. I can’t believe I wrote the song in truth and yet here it is. Suicide Song was our last song of the night on the Cushy nights at the 12 Bar. It was the last one after the last encore had been extracted from the last die hard regulars at 2 or 3 in the morning. I briefly toyed with the idea of releasing it on an EP with Stabbed and Till the Morning Comes under the Death EP title, but that one really never got off the drawing board unlike the others which you could say sort of fell off the drawing board onto the floor.

WARNING Do not try this at home.

PS the picture accompanying this post is one of my favourite Rhatigan photos at the 12 bar taken by Sarah Light. It is Bryn playing drums in the picture though not on the track. Unfortunately I have no photos of Paul playing with us at the 12 Bar or anywhere. If anyone has any please let me know xxxx