When do the bullied become the bullies?  At what point do you decide to turn the tables take control and choose to hit back, not walk away. 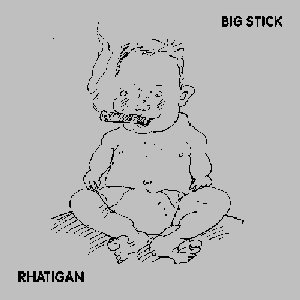 Big stick is a meditation on power and abuse.  It’s not difficult for me to tap into the vein of hurt and anger running through my life.  I don’t think anyone lives such a charmed existence they’ve never suffered at the hands of another to one degree or another. I’m lucky to have music and song writing to escape to and exorcise my demons through, and I quite enjoy letting my imagination explore any possible outcomes.  It is possible to dwell in the dark corners of fantasy without actually acting on those fantasies.  Well it works for me!

I wrote the lyric to Big Stick at a time when it felt like control of my life was slipping away.  Rhatigan had come perilously close to breaking through with Late Developer, and we had some great tunes in the bag ready to follow up but after too many knock backs Bryn our drummer decided to call it a day.  It was a major blow and it took several months to find anyone to replace him so unique and important a player he was/is.  We had to let go of that influence and personality and embrace something new.  Derry man Paul Murphy was eventually lured in and his style and personality were so different that the whole sound of the band shifted away from the explosive tight punk energy of Late Developer to the looser rolling groove that is Big Stick

During this period between drummers John and I thought about recording other bands at Cushy.  Darren Hayman was a song writer we had shared a bill with a few times in indie clubs around London.  I loved his blend of witty poignant tales of Christian girls and Grammar school boys and their comings and goings which he was quite preoccupied with at the time.  Anyway Hefner began to come together following a few early sessions recording with us at Cushy with John playing bass and Antony Harding on drums although I think I played drums on a few tunes having taken up the habit while trying to fill the void left by Bryn. Darren soon asked John to play a few gigs which as I recall took some effort on my part to persuade John to do.  I didn’t see the harm.  I simply didn’t consider the real possibility that Hefner’s star would rise so quickly and demand so much of John’s time.

In fact Big Stick was written by John and me with me playing drums, hence the whole ‘big stick’ thing.  John’s pulsing bass line was easy for me to accompany with a loose bump splat vaguely trip hop beat.  I played the song a handful of times solo on drums which was great fun, well fun for me.

I remember a couple of occasions playing Big Stick on drums with mixed results though.  The first time was during a tribute gig for a songwriter friend called Tom Greenwood who had died suddenly, and I was approached by the actor Tim Roth who happened to be in the club.  He was buzzing about the song saying it would be perfect in a movie he was directing at the time called The War Zone.  I duly sent a CD to the address he provided me with, but alas in the great tradition of the 50 Greatest Misses I heard nothing back.

Another unfortunate Big Stick moment occurred on a Cushy night which I ran at the 12 Bar Club.  I was doing a late set solo after the other bands had played and I decided to try Big Stick using the kit belonging to one of the other bands which had been left onstage.  The band in question were a rather over hyped indie 4 piece out of Manchester called Salako whom I had booked to headline.  Anyhow there I am bump splatting away, concentrating hard, eyes shut, pouring my heart and soul into the moment when the lead singer decided he wanted to head back up north, straightaway.  Well the little prick began dismantling the kit mid song which I was oblivious to at first as I was concentrating so hard and I hadn’t noticed the floor tom and a few cymbals had been removed until shouts and jeers from the audience shook me from my reverie. Ever the pro I kept going regardless and I got to end without belting him with my big sticks, but I was pissed off big time.  In the resulting kerfuffle between the band and my loyal Cushy regulars no one but me noticed the scally slipping out to the toilet so I followed behind.  I stood outside the men’s room for a moment and without consciously realizing it I knew what I had to do. In I went firmly shutting the door behind me.  Imagine the surprise on his spotty little face when he saw me approaching him as he tried stuffing his dick midstream back into his pants.  I can assure you I gave him a good tongue lashing at very close quarters. I can still smell the little creep.  Sweet as!