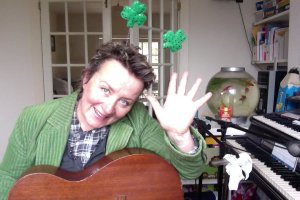 What does it mean to be Irish?  I don’t think I ever appreciated the good fortune I had being born Irish till I’d left Ireland and made my way to London in the mid eighties and later to New York.  I was however very keen to assure anyone who was in any doubt  that I was Irish, even though I really didn’t feel I had many or any Irish credentials. I felt a bit of a sham to be honest.  I had no meaningful connection to anything ‘Irish’ growing up.  Neither of my parents spoke any Irish, they came from a generation and section of Irish society that rejected most Gaelic culture, perhaps because of it’s association with armed Republicanism, which they were fiercely opposed to.

So if I don’t have the ‘Cúpla Focal’ and I can’t play the tin whistle am I still Irish?  Hell yeah!  One part of Irish culture I do identify with is storytelling.  I have the gift/curse of the gab so to speak.  My songs are pretty much just me gabbing about what ever is on my mind.  These days that’s ranges from the heady world of neighbourhood watch and schoolyard politics to the on going struggle of the soul to stay connected to something that touches and is current.  There’s also the melancholy factor, I have a touch of that too.  It’s that thing of never being really happy.  Always holding onto a bit of sadness, a little darkness in the centre.

One thing we Irish diaspora love to do is pine, usually in song.  You know the kind of thing, ‘The Mountains of Mourne’ and ‘Spansil Hill’ etc etc…  Endless verses about how we wish we could be back in the small towns and villages we ran out of.  None of it makes sense it’s all about guilt and longing and yearning, lovely jolly stuff.

When Nick Bicát asked me to write a song for a film about an Irish singer on the decline on the London circuit who makes a comeback, I came up with Homeward bound.  I was still making the pilgrimage home every Christmas on the boat, this was before Ryan Air and affordable air travel and so it wasn’t hard to conjure up the genuine emotion and anxiety every returning émigré feels at one time or other.  Homeward Bound shamelessly cashed in on all that stuff for all it’s worth but to no avail.  The song was rejected and the film never made as far as I know, so that alone qualifies it for a place in the Fifty Greatest Misses!  I don’t have any other tunes that sound ‘Irish’ and it is Paddy’s day, so Homeward Bound it is!