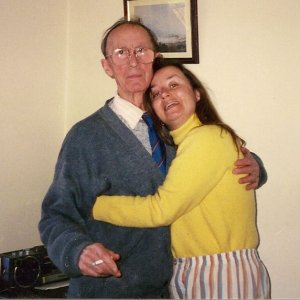 “You have my heart broken” Dad would say while peeling me off him sticky with kisses that were barely tolerated. He had long since given up even trying to stop me, but as of course every parent will attest he never stopped loving.  This answer phone message is quite typical of him trying to make light of his anxiety that some accident or misfortune might befall me.  He was of course my hero, my go to guy, my best friend. He couldn’t stop the knocks though.

On the occasion of the drubbing described in blog no 24, Dad was up in arms he even threatened legal action against the school if an apology wasn’t forthcoming. He had received written assurances from at least 2 of my teachers that they made no such statement about me.  My knight in shining armour!  Of course he got nowhere with the powers that be, just stonewalled.  He kept pursuing it though until I had finally left the school and then he let it go.  Not before most likely conveying his disgust in lengthy, wordy missals to the Head Mistress, a Nun who incidently a  short time later left the convent and married a man with 6 children!