One of the funnest things about doing this blog has been the opportunity to remix and overdub recordings that weren’t finished at the time of the original sessions, Holiday being a case in point. The original recording is from around 2001 and Dave’s re-mix was 2010. New parts vocal, extra bvs and my remix are straight off the press. Read on to find out more X

The Thrill of the Chill

‘Hey boys and girls would you like to fly out for a week or two?’

Here we are over a year in to our confinement remembering longingly the freedom of travel.  The days when we could just up and go. Cheap airfares enabled us to step out of our real lives into a holiday realm. To hell with the cost to us, to the planet… it was ours for the taking.  Now we’re living through a dystopian nightmare beyond our imaginings, way back then, a whole year ago!

On the plus side, here we are discovering the wonders of our own neighbourhoods.  A bit like those dreams where you open a door to a room in your house you had somehow never known existed revealing a palace with great halls and gilded arches.  You just can’t understand why you never opened the door before.  You feel at once excited and kind of stupid.  Where were you all my life?  Right here you fool!

We’re so lucky to live by the sea.  Within a couple of kilometers of our home is a long sandy beach with dunes, wildlife, wind surfers and suffice to say, water.  The beach known as Dollymount, is on Bull Island a massive sand dune formed over the last two centuries, following the building of the North Bull wall in 1821,which stretches out into the Irish Sea.

The North and South walls were built, following a nautical survey carried out by the infamous Captain William Bligh, to divert water into the port in order to deepen the channel and allow larger shipping to access Dublin City.  As a result of silting on the north side of the wall our beautiful Island emerged, which until the building of the causeway road on the northern end of the Island, was only accessible since 1907 via the now iconic Wooden Bridge or ‘Brown Bridge’ as we used to call it when we were children.

Our childhood summers were spent wandering through the dunes and swimming at the steps positioned at intervals along the wall marked by distinctive art deco bathing shelters. The bathing shelters and the Kiosk and other shelters along the promenade on the mainland between Fairview and the Bridge, were designed by architect Herbert Sims. These iconic structures identify the seafront at Clontarf.

Swimming is my favourite leisure activity. I regularly swim in the pool near where I live but since my return to Dublin from years living abroad the local swimming spots didn’t really appeal.

You see, perched as we are at the opening of Dublin Bay, a busy industrial port, which caters to ferries and freight coming and going and all the city crap coming and going, the water is at times, at least in appearance, not very attractive to swim in.  Most of the time the beach proudly flies a blue flag, sometimes however, after heavy rain, the flag comes down and the ‘do not swim’ signs go up.

I have friends who have been swimming in these waters rain, hail, snow and E Coli for years and while I admired them, I couldn’t see the advantage over my clean pool followed by a steam and a warm shower so I passed. This year with the pool being off limits I ventured into the sea. 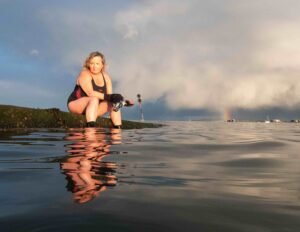 A dip at the slip Photographer Lynn Feeney

Throughout last spring and summer I watched the tides and headed on my bike out onto Bull Island to swim.  Some days the weather was just too awful but I noticed not 300 meters away from my front door, at the slip for the local yacht club, there were people swimming.  I decided to give the spot a go.  It’s the same water, but it is 1 minute from my house, why on earth had I never jumped in before.  A few of the days the water cleared and I went snorkeling.  I swam with shoals of small sprat and tickled crabs as they scuttled under rocks. I couldn’t believe it.  All this time I had my own reef right under my nose.

As the winter drew in I figured I would probably not have the tolerance of the cold to continue, but buoyed on by a growing group of friends, seasoned and newbie sea swimmers, I kept going.  I invested in the gear, neoprene boots and gloves and now the thrill of the chill is what I love the most. I can’t tell you how great it feels.  It is so exhilarating.

I’m not going to lie, there are some days I look out at the mid December gloom or the ferocious February easterly winds and think, I’ll give it a miss today.  Then my phone lights up with a message from one of the swimmers putting out the feelers for a swim buddy, then another and another.  Before long there are different swimmers heading out at different times within the four hour tide window and the FOMO takes over.

I can’t stop the niggling voice.  Go on, you know you won’t regret it, go on, go on, go on. It’s true, bracing and brutal as it is in the worst of the weather I never regret it.

I feel so wonderful in the water; it’s like an out of body experience.  The weight of the world is literally lifted from me.  Gravity and the Covid kilos are definitely playing havoc with my joints but in the water all the pain disappears. My mind clears of the conflicts and worries I wrestle with on dry land.  It is meditative, like being in an alpha state.

I have occasionally experienced alpha state playing music.  That feeling of being fully focused yet completely relaxed.  It is an elusive state certainly. Disengaging thinking from playing is truly difficult.  It takes many many hours of practice to achieve the skill required to let go of conscious control, but when you do… It is sublime.  That’s why I swim.  It’s the only other place where I get even close to that feeling.

Cold-water swimming offers another element.  The physical discomfort and the sheer effort of the challenge elevate the feel good factor above and beyond.  I feel like a super hero when I climb out of the water. My skin stings, its scarlet tan glows hot, bellying my low body temperature. Often the air temperature in winter is lower than the water and you get that wonderful hot and cold feeling, like Baked Alaska.

I’m not going to sugar coat it, you need to be prepared, get yourself dry and dressed warmly ASAP, with hot bottles and drinks to return your body to it’s correct temperature. But all that is just logistics. You wriggle out of gloves and boots and swim suits into dry clothes with practiced ease and sit back sipping on your hot tea feeling fantastic.

I did that, you think, I braced the cold out here on the edge of the island, I took on the freezing tumultuous sea and I came through. Go me.  You can’t buy that feeling.

It stays with you too. I am floating and buzzed up for hours with energy I forgot I had.  I feel calm and confident and happy.

All the feelings you wish for on say… a holiday.

A holiday is really just a mind-set, it’s anywhere anytime, it is escape, whether for a week or an hour, seek it out and enjoy.

When you really get the holiday effect, it’s like standing still in time.  But even on holiday life is moving on.  The noise just becomes quieter.  Quiet enough for you to tune it out and hear the music.

When John Morrison and I wrote Holiday it was toward the end of our time together.  It was like a holiday when we were working on a new song.  It was escape.  At the time the band was drifting apart and I was spending less and less time making music, as family commitments were pulling me away and John and Paul were also busy with other projects.  I knew the writing was on the wall, but for those brief hours I could pretend everything was going to be alright.

It’s the same trick we play on ourselves when we head away on holiday.  We fool ourselves that all our problems and challenges have disappeared. We push reality out of our conscious thoughts until the last minute, probably till we pack our bags and head to the airport.

‘Holiday’ has that lazy days feel, it kind of meanders along, drifting, warm content.  Maybe it was bit too sweet, I can’t exactly remember, but something prompted me to send the stems to my old collaborator David Barratt to see if he might take it in another direction and well, he did!  Dave never disappoints.

I have decided to offer both versions of the song because they are so different and I am interested to hear your views.  It is not a competition, I love both versions. I would add, both were produced way before the pandemic however they could be before and after.

What do you think?

PS:  Dave recently invited me to contribute to his Poetry Corner project.  I loved working on it.  Dave is a fearless producer capable of working in a wide range of styles as reflected in this collection. Here’s my contribution https://poetrycorner.substack.com/p/10-the-uses-of-sorrow-by-mary-oliver