I love collaborating with other songwriters and musicians, when a song writing partnership works it is something very special. But the sense of achievement you get when you write a song alone, lives with you forever. 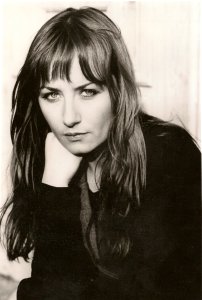 I was a spectacular under achiever academically, there was very little expectation or pressure put on me growing up to aspire to anything even marriage! So there were no objections when I decided to embark on a singing career. Singing was the one thing no one could deny I did well and since I didn’t believe I was clever enough to be a writer singing seemed like a good alternative.

The first person to encourage me to write was Deke O’Brien. I met Deke at a party when I was about 19. When I heard he was a producer and had a record label I think I burst into song there and then. Deke heard something worth working with and he put me in the studio demoing songs with a writer he was developing called Dave Freely. It was the many hours behind a mike in the studio with them that set me up in my career. I remember him advising me to write. “That’s where the money is Suzi” he said. Still it wasn’t for nearly another decade when my session singing career in London was in full flight that I finally started to believe, maybe I could be a writer.

I started relatively late. At 25 or so I bought a piano and took some lessons. I did grade 1 and 2 exams at The Royal College of Music. I remember the day as if it were yesterday, better perhaps! I sat there shaking with fear outside the exam room with half a dozen 7 year olds. I soon began to gain confidence and found myself unable to practice scales without improvising around them and composing my own pieces so I abandoned formal training and kept doodling and noodling till a few songs finally emerged. Still it takes discipline and self confidence in the extreme to fully realise an idea from the initial melody or phrase to something even as lowly as a ‘pop’ song.

By 94, despite having built a repertoire of songs mostly co-written with others, and releasing To Hell With Love, I still wasn’t very confident in my song writing abilities to go it alone too often, until I wrote Waiting For The One. It doesn’t break any boundary musically or new ground lyrically but it is certainly as honest and heartfelt a song as I’d managed thus far and I think it has a lot of credibility for that reason alone. This live Wurlitzer and vocal take is the only performance of the song I can think of, other than occasional drunken attempts in friends homes on out of tune upright pianos…..

Just having a little online tete a tete following the above upload, with my old friends Jack Daley and Albert Grootonk and this song came up in conversation.  Gives you some idea how difficult  it was going it alone when I was working with a lyricist like Craig, now he really does have a way with words…

Good with words was one of a number of songs we demoed in 1993 for my 2nd album for Imago, which of course never happened.  I had been touring for a year with fabulous  musicians from New York where I was living at the time and we were well oiled and ready to go when the plug was pulled.  We would have made a fine record , I think….