Suzanne Rhatigan is at once a Singer, Songwriter, Voiceover Artist, Blogger, Copywriter and Producer with her own Studio. 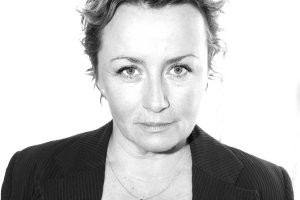 Suzanne’s unique music, writing and performance is enhanced by her wide experience in every area of contemporary music and her colourful and diverse life. Influenced by great writers and artists across the spectrum from Barbra Streisand and Aretha Franklyn to Guided By Voices and Pat Ingoldsby, she has been described as a cross between Iggy Pop and Rita Hayworth.

“Suzanne Rhatigan will put goosebumps on your goosebumps”
Hot Press

1st it was children’s talent shows, then short lived bedroom bands, a few spots with Daddy Cool and The Lolipops, on a Monday night in St Laurence’s hotel, then lead singer in a few gigging bands in Dublin in the ‘80s, 5th Avenue, Toy With Rhythm and Les Enfants, a job singing in a studio, then another and another and a few stints presenting the ‘Irish News’ section of seminal RTE TV music show MT USA before making the move to London followed by more sessions a lot more, a bit of song writing then some more, a lot of demos and rejections etc etc etc a cameo part as Camille Kochanski in Red Dwarf more demos then…

A deal with publishers Peer Music. Soon after a record deal with New York based Imago Records. To Hell With Love, Suzanne’s debut album was released in 1992 and was distributed and promoted world wide by BMG/RCA. Great laughs, but not such great sales!

Then back to London and new song writing partner with bass player John Morrison. This partnership marked a change of direction in her music from mainstream roots/pop to a more indie/alternative sound. Rhatigan the band was formed and their live shows quickly brought her to the attention of Organ Fanzine who released the Late Developer album to widespread critical acclaim, but not such great sales!
Suzanne on Bandcamp

Suzanne set up Cushy Productions in 1995 to both release Rhatigan records and to record other writers and bands she liked. At that time she began a residency in London’s famous 12 Bar Club which ran monthly till 2003 and was one of the stand out new music nights in the city.
Cushy Productions

Then babies and home….

Suzanne recently fulfilled a lifelong dream to build her own studio, where she is working on new material for an album and producing new up and coming bands and artists, doing voiceovers and writing copy and creating content for all manner of media.

This is Suzanne’s dedicated website with lots of information and examples of her work, including her blog 50 Greatest Misses choc full of stories and songs chronicling the adventures and misadventures in her life and career to date.