Where did that go? Last post… No 38, November 2015… I believe I signed off saying, I’ll fill you in on the finale soon, but unfortunately promises like ‘soon’ and ‘I must do that’ are symptomatic of a chronic condition that I’m currently battling.

M.A.D (Middle Age Disease) (def) A progressive malaise leading to worrisome creeping indifference, reduced sensation of urgency and complete loss of sense of time. Days become decades, decades, days. Not confined to the actual middle aged, it can afflict anyone at any time. Worryingly it is quite infectious, though perhaps unsurprisingly, M.A.D is not transmitted sexually. Treatment: Frequent kicks up the arse, if you can be arsed.

Now where was I…

In fairness Chris and Bryce stayed till the end of our disastrous gig and tried to put a positive spin on it but over the following days and weeks enthusiasm was waning, calls not readily returned, meetings cancelled. Then suddenly a meeting hastily convened on a Friday evening. Bryn, John and I headed off with our hopes high, we thought we were going to go through figures and deal options etc etc but it became sickeningly apparent from the joyless greeting in the pub “no rounds, have to head off soon”, that this was not going the way of celebration!

They didn’t waste time and I guess they tried to soften it a bit with the ‘it’s not you it’s us’ line. Courtyard were renegotiating their own deal with Parlaphone and that was dragging on and they didn’t want to hold us back etc etc. I probably didn’t quite get what they were saying, it didn’t sink in “Well we can keep working on our new material sharpen up our live set, sure no problem” I suggested. Then it was a little more like, ‘actually it is kind of you, and not us’

Our lack of consistency. BOOM. Flashes of brilliance obscured by frequent and random collapses of form. BOOM. Refusal/inability to adapt to commercial requirements and standards of production and performance…. SPLAT. “Ah now hang on” I said “if we had the funds, technical assistance, a guiding hand, all that could be sorted out surely”. I didn’t give up, I refused/was unable to adapt to our new status, till in the end I think it was left at, ‘we can still be friends’, which as we all know means nothing.

We were reeling, the Courtyard deal was gone and the industry interest generated by their interest had evaporated. Months passed. We kept our 12 Bar nights going and we wrote fury infused self loathing pop and tortured ballads of loss and loss, most of which are probably best never heard, when out of the blue the phone rang.

Would we like to open for Radiohead in Dublin a secret warm up gig for their OK Computer tour? Like to? Er yes! So we scrambled our dole money together to pay for the flights and we borrowed some gear from friends in Dublin and we headed off. This could be our
chance to turn things around. 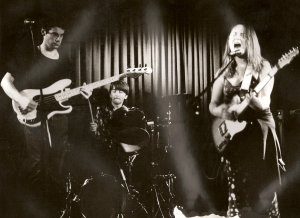 “You’ve got 30 minutes, you go over we pull the plug”, the stage manager informed us and a moment later I was standing at last, centre stage at the Olympia, a life long dream. The heaving throng of Radioheads stared up expectantly.

‘Julianne’, probably the pinnacle of my self disgust distilled into 3 minutes of punk pop. Score. Genuine spontaneous audience buzz. Quick guitar change to retune and on with borrowed second guitar.

No time to fart around, into the 2nd song only…. guitar dead. Fiddle with leads, nothing, check pedals nothing. Minutes pass. The audience buzz is more impatient now. I call out to my friend Tom who was helping out with roadie stuff, to get back with my guitar. No response. “Tom” I call again trying to make light of it, “TOM” I roar more urgently. “Jaysis Tom, pull the finger out” a radiohead heckles from the stalls.

Laughter resolves to loud talking as I plead with the Radiohead crew standing in the wings for help, to no avail. At last Tom emerges, red faced and breathless. Turned out he had been refused permission to retune in the wings and had climbed 2 or 3 flights of stairs to the dressing room thinking he had a couple of songs to sort it out. Bottom line, 15 of our 30 minutes and that beautiful fleeting moment of triumph had been stolen from right under our noses.

We had time for one more song, which we executed proficiently and in a timely fashion. We climbed the stairs to our dressing room and sat in heavy silence, drinking our ‘rider’ (1/2 dozen warm beers), when a slightly down cast Bryce stuck his head around the door. “Well another typical Rhatigan gig” he said without irony. “Thanks for asking us anyway” I managed. He shrugged, “Don’t thank me, it was Thom’s idea”.

A year or so later I found myself hob knobbing at some industry awards function or other in some Mayfair hotel or other when I bumped into Chris Hufford and entourage. He greeted me with open arms “Suzanne, how are you?” “Yeah great” I proffered, upon which he turned to his party and introduced me with the exuberance of a man plainly under the influence. ”Everyone this is Suzanne Rhatigan” a clumsy arm flung around my shoulders. “Suzanne is one of the most talented people I know. She should be a big star, but…” he said wistfully, “if it wasn’t for her”… He’s wagging a finger at me now… “she would be a huge star”.

I laughed it off and tried to wriggle free from his embrace. “Yeah” he repeated, “if it wasn’t for her…” his grip tightened, “see it’s in her eyes”, his eyes swam into mine, “it’s in your eyes”, he half whispered. “No problem” I said “I’ll close my eyes”. Which I did. “It’s no good, it’s no good,” he wailed. “It’s in your eyebrows”.

Well really, what the fuck can you do with that? I smiled, sort of, and prised myself away, comforted somewhat when I realised most of the others, who were at least as jarred as him, had resumed their conversations barely having noticed or heard.

I know I’m not alone among my human cousins when I focus on my failings and failures in life. I either don’t hear or see the compliments and small victories or I take too little joy in them, preferring to indulge in self-scorn. Proving to my self that I’m not the loser, I’m so ready to think I am, has been grist to my mill for too long. Hell even this blog moniker ’50 Greatest Misses’ is testament to that.

Don’t get me wrong, I think that surviving a career comprising one set back after another calamitous mistake should be celebrated. I find the situation funny, most of the time. I hold no bitterness toward the many people, professionals and friends who’ve played a part in some of these blogs, quite the contrary. Even the most humiliating and regretful moments in my life I treasure. They’re my stories and good or bad, I do love to tell a story.

PS: ‘Julianne’ is on the ‘Big stick’ mini album, which is available for download on Bandcamp

PPS: Our valiant friend Tom Greenwood (of pull the finger out) died a few months after the gig. He was a lovely and talented man. Gone but not forgotten.

PPPS: I am currently in remission from M.A.D and hard at work in my studio on a new record. No really!

You don’t believe me? https://www.youtube.com/watch?v=jjaYCIq5z3A